King Jaime II ordered to build this palace at the beginning of the fourteenth century so that his son Sancho could find a relief to the asthma disease he suffered from.It is believed it was built on the old fortress of a Moorish wali called Mussa or Muça from where comes the name: Valldemossa.The palace was one of the rural castles of the Majorcan dinasty used to get some rest. The palace’s falconery and the road united to the Teix royal house show us that the hunting was, indeed, the main activity.We know the visits of Kings James II, Sancho I, James III y John I since they are well documented in various maintenance Works:Payment to Bernat Tarragó, the king’s carpenter, master builder and architect in Majorca ,in order to repair the galleries of the queen’s room in Valldemossa’s royal palace, wich is in serious risk of falling down.

The palace was distributed around one patio. To the north there was the royal hall, wich was adorned with deers relieves and was connected to the ground floor of a tower where the king had his room. To the south, a big kitchen and the larder. The access was through an stone entrance hall and one winding staircase conducted to the first floor. To the west, there were the queen’s chambers, and to the east, some annexes. The buildings were preceded by porchs with ogival vaults.

Concluded the Majorcan dynasty, the palace fell into disuse. King Martin I de Aragón transfered the palace in the year 1399, in order to convert it into a charterhouse. The monks converted the parade-ground into a cloister and a cemetery; five big drawing-rooms became cells, the jail was converted into a refectory, the larder into a sacristy, the kitchen into a church. Some other palace’s rooms were also converted into a kitchen, an oven, a cellar, lodgings and an stable.

The Santa María Cloister is dated 16th and 17th centuries, six chapels were opened to the east and to the west for the monks’ private masses, being the first of them the only one that remains unchanged. To the south there were nine cells and to the north, the primitive gothic church that disappeared on the 19th century, today being used as a concert hall. Paintings showing scenes from Valldemossa’s history are by R. Anckerman (1842-1907).

The extension of the charterhouse started in 1717, including news cloisters, cells and the church, although these old buildings remained in use.

Gaspar Melchor de Jovellanos, King Carlos IV’s Justice Minister, was exiled by Godoy in the year 1801 to the Valldemossa Charterhouse.

Monks instead of considering Jovellanos a prisoner gave him an illustrious guest treatment , living in one of the cells of the guests tower’s noble floor, wich was built in 1555, in order to defend the village from the Moorish attacks. Between those 1,5 m wide walls Jovellanos found the inspiration to write Instrucción pública, Historia de la Cartuja de Valldemossa, and a desk diary which reflects his stay here.

He took part in the religious life for a year helping with the new church decoration, advising Fray Bayeu about his fresco paintings and writing, together with the chemist brother, one botany treatise. To the end and due to the attentions he was given, was sent to a worse exile in the Bellver castle. 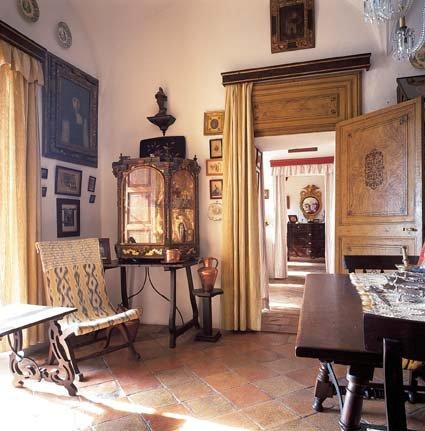 The expropriation of churchs assets ordered by Mendizabal took place in 1835 and the Carthusians were forced to leave the monastery. It went into private hands which explains the present decoration, typical of Majorcan manor houses, as a result of the change and adequacy due to the new residential use.

Since then, guests who have spent some time in the primitive charterhouse, have contributed to enrich its history: Rubén Darío, Azorín, Unamuno, Santiago Russinyol, Eugeni d’Ors…

The red and yellow drawing rooms are both good examples of the typical decoration in the sitting rooms of Majorca’s aristocracy houses, last century.

The tapestry on the wall, in scarlet and gold, with grenades design and the quality of Majorcan furniture transformed those pieces in exhibition and splendour places.

The yellow drawing room is the family pictures gallery. Standing out the empire-style divan and various Majorcan chairs. The furniture in the red drawing room is baroque (XVIII century style) silk upholstered and comes from ca’n Orlandis.

The Nicaraguan poet Rubén Darío lived here in both, 1906 and 1913, during the private stage of the House, invited by the owners: the Sureda’s family.

He was very much impressed by the monacal life and with the old chartreuse spirit that was still kept within these walls. As a result of this, he portrayed himself with the Carthusian habit.

During the time he was there he wrote the poem La Cartuja, and said, in his own words “the best that I’ve written in my life”, and also wrote the novel The Mallorca’s gold.